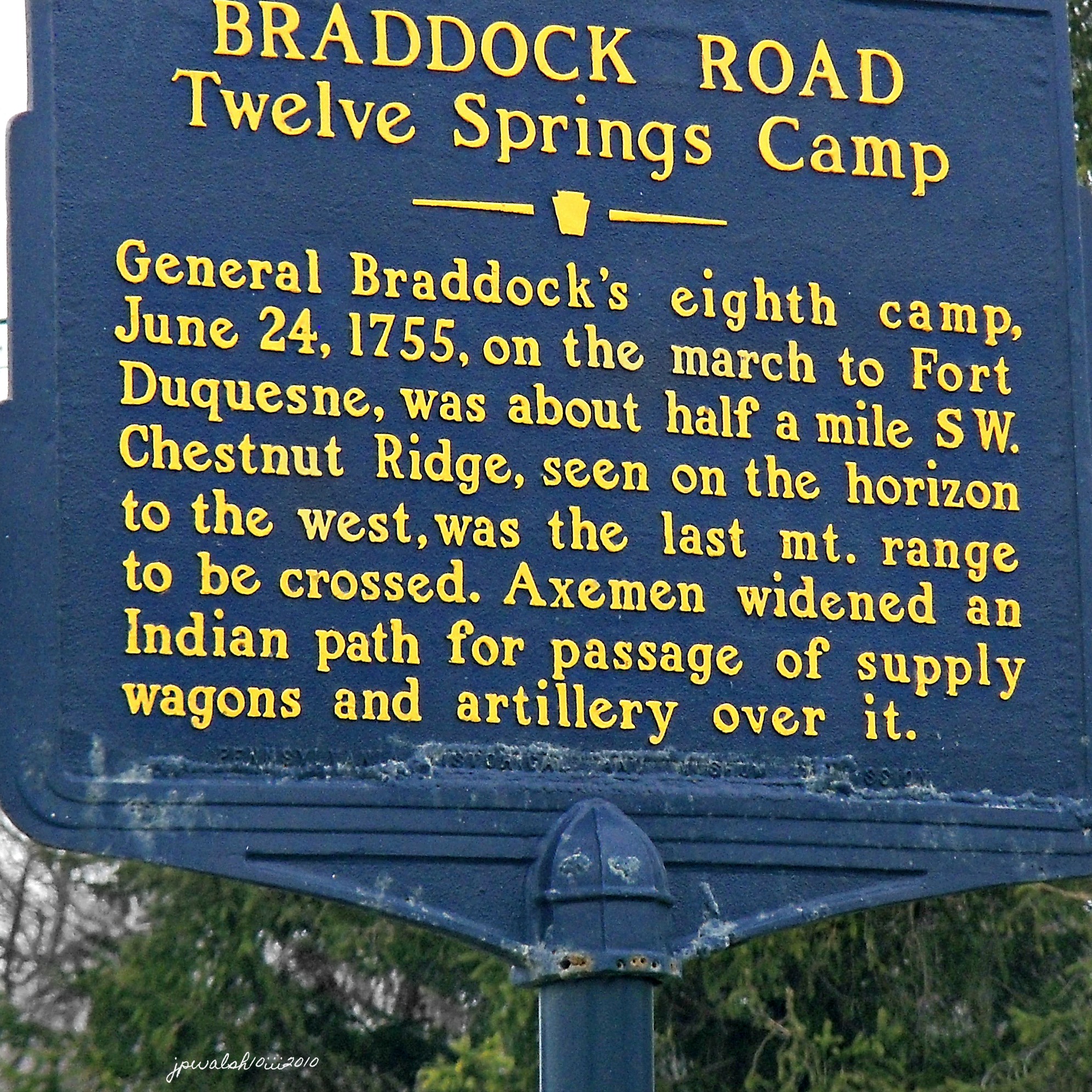 The Braddock Road was a military road built in 1755 in what was then British America and is now the United States. It was the first improved road to cross the barrier of the ridge lines of the Appalachians. It was constructed by about 2,500 troops of the Virginia militia and British regulars commanded by General Edward Braddock (1695-1755), part of the expedition to conquer the Ohio Country from the French at the beginning of the French and Indian War (1756-63). George Washington, who was aide-de-camp to Braddock, had pioneered this route a year earlier when he traveled into the Ohio Country and met Native American leader, Tanacharison (1700-1754).  The expedition gave Washington his first field military experience as well as other American military officers whose numbers profited from this military outing later during the American Revolutionary War (1775-1783).

Braddock’s men had to cut a road wide enough to accommodate the wagons and draft animals that accompanied them, as well as the siege artillery that they brought along to use against the new Fort Duquesne established by the French in 1754 at the confluence of the Allegheny and Monongahela rivers.  Progress was painstakingly slow until Braddock split the force into a lead column of about 1,500 men and the rest as a support column to drag artillery and supplies. The flying column made rapid progress, and with each day, the distance between it and the support column increased. This marker is on the (later) National Pike (Route 40) between Elk Park and Farmington, Pennsylvania.

PHOTOGRAPHS I FORGOT I HAD: INTERNATIONAL. Sometimes with brief explanations.

Tourists can visit the “gargoyles” on the façade of Notre-Dame in Paris by reaching the passageway to the outdoor balustrade of the tower base. There is a second balustrade at the very top of the tower but it is not open to the general public.

The exuberant Gothic design of the Cathedral, a stone structure that dominates the Île de la Cité in this most ancient part of Paris, was built in stages. A project instigated by the Bishop of Paris, Maurice de Sully (in office, 1160-1196), commenced with the construction of the choir in 1163. The front portals followed around 1200. The next stage included the towers which began their ascent into the Paris skyline in the 1240’s.

From the ground level upwards to the top of the cathedral every detail of the building is meticulously construed. One of its world famous and popular attractions is the various gargoyles: birds, humanoids, chimeras, etc., that dot the medieval building. With changing artistic taste, the Gothic period architecture was mostly reviled in Paris after about the year 1400. Accompanying political and cultural events in the nineteenth century–especially the crowning of Napoléon I (1769-1821) as Emperor of France in Notre Dame de Paris in 1804 and the publication of the French Romantic Gothic novel The Hunchback of Notre Dame by Victor Hugo in 1831–public interest in Gothic design and Notre Dame in particular (which had fallen into great disrepair) was revived. Under French architects Eugène Viollet-le-Duc (1814-1879) and Jean-Baptiste-Antoine Lassus (1807-1857) most of Notre Dame was overhauled in the 1840’s. As with many of its medieval-style treasures, the cathedral’s many gargoyles also underwent some reconstitution but the question remains as to how many precisely were reconstituted and to what specific extent. 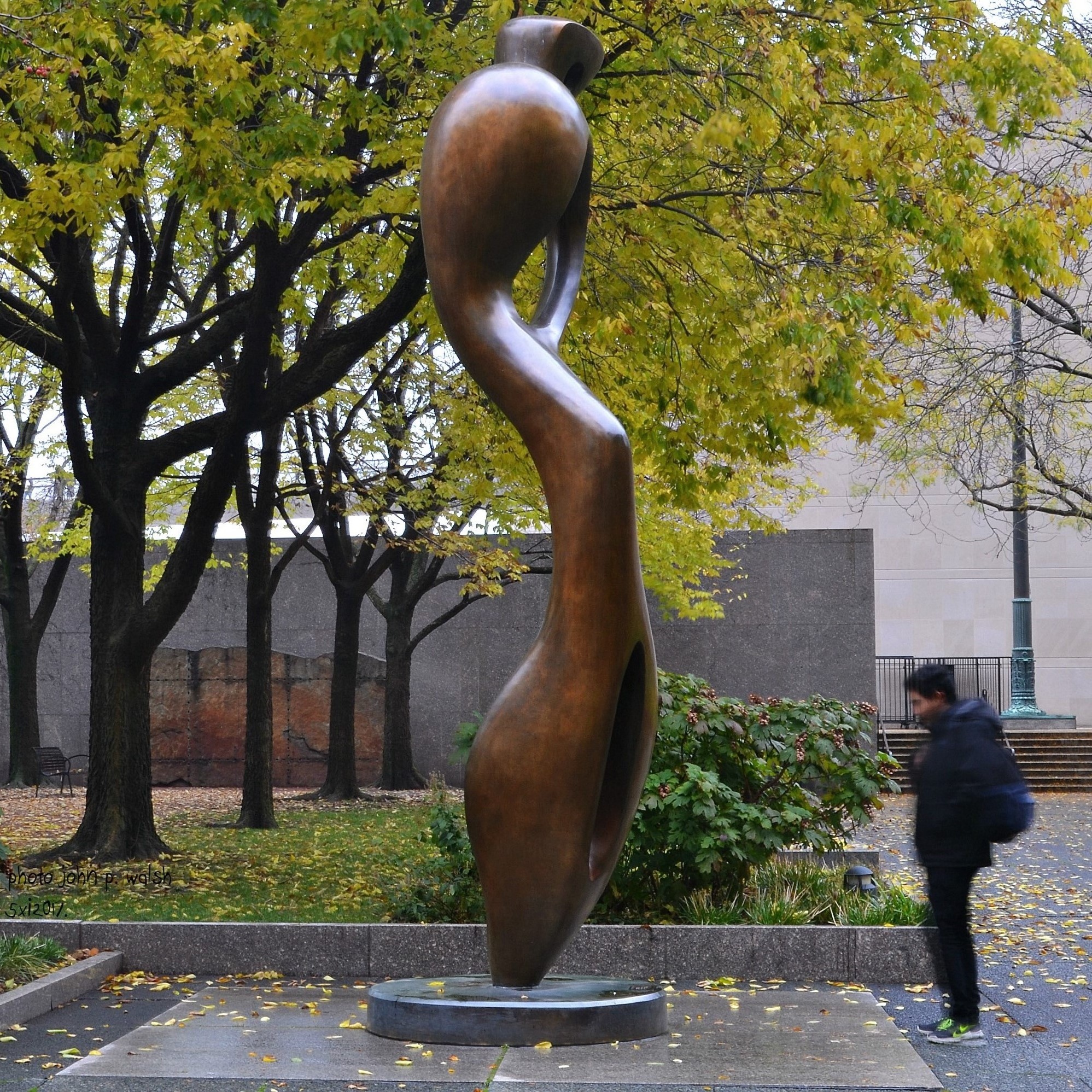 “Henry Moore’s towering 16-foot sculpture Large Interior Form is among his more mature works, made when the artist was concerned with the construction of three-dimensional space, internal forms within solid volumes, and placing his work in a natural setting. Early in his career, Moore worked primarily in stone but shifted to modeling and bronze casting once these formal concerns took hold. Large Interior Form plays with mass and void, gravity and growth…and juxtaposes its natural-looking shape with its man-formed substance.” (see http://www.artic.edu/north-stanley-mccormick-memorial-court – retrieved July 9, 2018).